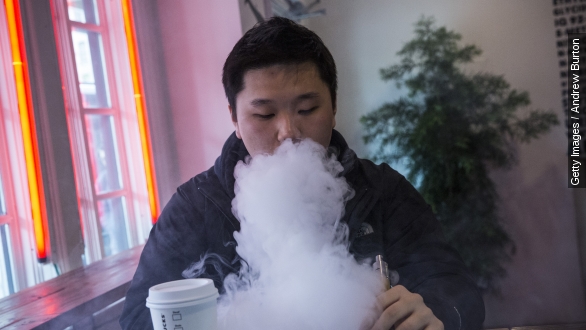 E-cigarettes are the hot new thing among middle school and high school teens. That's according to the Centers for Disease Control and Prevention, which says vaping has tripled for both age groups.

The e-cigarette market is a fluid one. The government is still a bit indecisive about how to regulate them. Even though the Federal Drug Administration has put restrictions on e-cigarette sales in the past, it's wavered on how strict those regulations should be.

Most states have restrictions on anyone under 18 buying e-cigarettes, but, as Forbes points out, "that's clearly not stopping teens from getting them."

The CDC report also says more teens were into hookah and e-cigarettes than cigarettes and traditional tobacco products.

While e-cigs don't contain tobacco, they do contain the addictive drug nicotine, which can have negative effects on an adolescent's brain and can even lead to overdoses.

"This is something that truly is going to have kids die from inadvertent overdoses.  ... It's worth getting the message out that this is a scary substance," Dr. Jennifer Barker told our partners at WRTV.

Just a few weeks ago, the CDC released its first anti-smoking ad featuring an e-cigarette user.

"Then I tried using e-cigarettes, but I ended up just using both," the ad says.

The CDC says this is the first time e-cigarette use has topped traditional tobacco among teens.