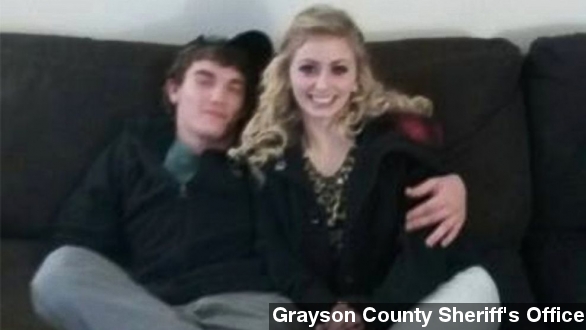 Two Kentucky teenagers who have been on a multistate crime spree for about two weeks were arrested Sunday morning in Panama City Beach, Florida.

Authorities say they found the two asleep in a stolen truck, the latest in a string of stolen vehicles they used to get to Florida. (Video via WAVE)

Authorities say on Sunday, Jan. 4 the two stole a red Toyota truck in Kentucky. On Monday the 12th they cashed a stolen check in South Carolina. On Wednesday the 14, a silver Toyota was reported stolen in Georgia. Authorities arrested the two in Florida on Sunday the 18th.

The Grayson County Sheriff’s Office said the severity and danger of the duo’s crimes escalated as the manhunt went on. Several of the stolen vehicles carried firearms. (Video via WSB-TV)

A few outlets looked to history to characterize the couple:

ABC also echoed the nickname, reporting, "The couple dubbed a modern-day Bonnie and Clyde, a teenage girl and her boyfriend."

But unlike Bonnie and Clyde, who are thought to have killed at least nine police officers during their crime spree in the 1930s, it appears no one was so much as injured during Phillips and Hayes’ time on the run.

The Grayson County Sheriff also criticized the media for that Bonnie and Clyde comparison, pointing out the couple hadn’t committed any violent crimes like the ‘30s duo did.

Authorities plan to extradite the teens back to Kentucky to face multiple felony charges.