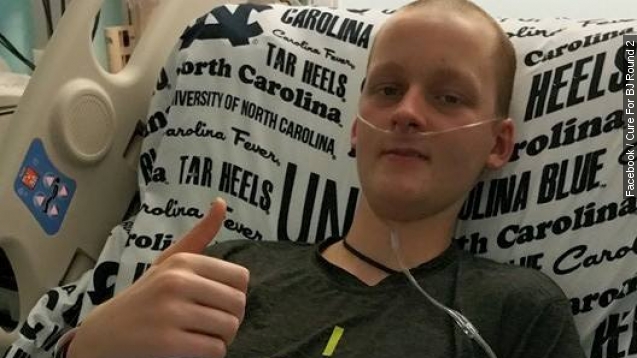 The Navy SEALs have just inducted their youngest member. Sort of.

"You are now a Navy SEAL," said Stephen Brown, a member of SEAL Swim Charities.

BJ Correll, a 14-year-old with leukemia, was given quite a surprise when a group of retired SEALs came to his hospital room and made him an honorary member.

After doing a middle school project about the SEALs, Correll dreamed of joining.

But in 2012, Correll was diagnosed with leukemia and began treatment immediately. And with just seven months of treatment left, Correll found out the cancer was back.

Correll is now undergoing more chemo to get his second bone-marrow transplant. A GoFundMe campaign to help pay for his medical bills was set up and, as of Tuesday, had raised more than $6,000.

This video includes images from Getty Images and Facebook / Cure For BJ Round 2.