Ted Cruz Wants To Keep SCOTUS In Deadlock; Congress Might Not Agree 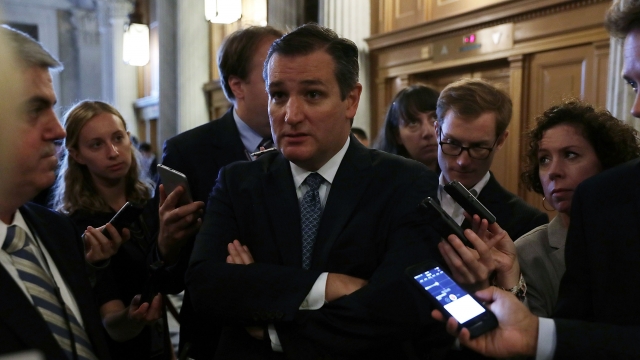 SMS
Ted Cruz Wants To Keep SCOTUS In Deadlock; Congress Might Not Agree
By Grant Suneson
By Grant Suneson
October 27, 2016
The Texas senator said there's precedent for leaving a Supreme Court seat empty, but that's not the case.
SHOW TRANSCRIPT

Partisan gridlock has kept the late Antonin Scalia's Supreme Court seat vacant for months, but we can finally expect it to be filled after the election in November, right? Well, maybe not, according to Ted Cruz.

The Texas senator isn't sold on having a full Supreme Court if Hillary Clinton is elected president. Cruz said there is a "long historical precedent for a Supreme Court with fewer justices. … That's a debate that we are going to have."

But that precedent doesn't really exist — at least, not in the way Cruz is suggesting. The Supreme Court did have six, seven and eight justices at various times before the 20th century, but that's because the number of seats on the court itself changed, not because any were left unfilled.

Law professor Steve Vladeck told CNN, "Historically, when Congress has been concerned that particular seats on the Supreme Court should not be filled, it has eliminated the seats. … Calling for the Senate to simply leave a seat on the Court open in perpetuity is, in fact, unprecedented."

There have been instances in the past when the Senate rejected some individual nominees for the court, but it's unheard of for senators to refuse all nominees — as John McCain pledged to do recently.

"I promise you that we will be united against any Supreme Court nominee that Hillary Clinton, if she were president, would put up," McCain said in an interview with 1210 WPHT.

But for now it seems unlikely that enough Republican senators would agree to go along with that. GOP Senate Judiciary Committee members Chuck Grassley and Jeff Flake said they're not interested in blocking all potential Clinton nominees.

And this all becomes irrelevant if Democrats win control of the Senate and gain the majority needed to approve a Supreme Court nominee.