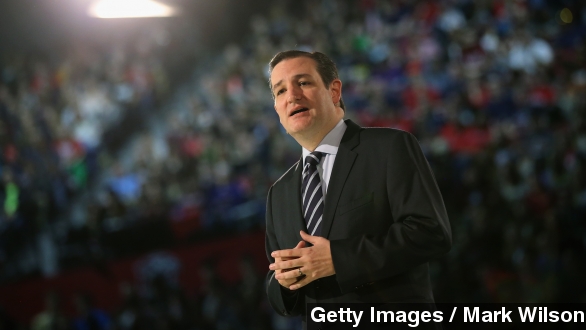 "Today I want to talk with you about the promise of America," Sen. Ted Cruz told a crowd Monday morning.

Ted Cruz kicked off his campaign for the 2016 Republican nomination at the biggest Christian university in the world — where he talked about his faith, his Cuban heritage and arguably got the biggest applause for a line about abolishing the IRS.

Of course, he technically kicked it off before that speech at Liberty University on Monday morning.

The first-term Texas senator posted a campaign video to his Twitter account overnight along with the caption, "I'm running for President and I hope to earn your support!"

The Houston Chronicle reports the conservative politician will skip an exploratory committee and instead directly launch his campaign. (Video via Office of Sen. Ted Cruz)

Cruz was recently in the early primary state of New Hampshire but played coy about his motivations.

The latest 2016 polls generally have Cruz trailing behind other names in the Republican field, including Jeb Bush, Chris Christie and Scott Walker.

Cruz's announcement Sunday gives him a slight head start over fellow Sen. Rand Paul, who is expected to announce his candidacy April 7 in Louisville.