Tech Stocks Are Up, Down And All Over The Place 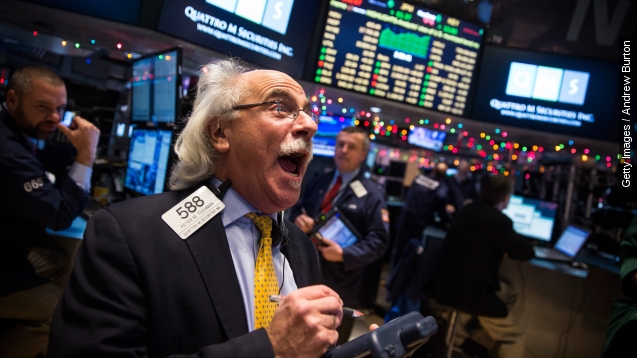 SMS
Tech Stocks Are Up, Down And All Over The Place
By Leah Becerra
By Leah Becerra
July 21, 2015
Some of the biggest tech stocks have also been the most volatile this week, including IBM, Tesla and Google.
SHOW TRANSCRIPT

Volatile is a word that easily sums up technology stocks this past week. Whether the extreme highs and lows are a sign of a bubble is debatable.

Nevertheless, it's just plain freaky to look at some tech companies' stocks lately, especially those belonging to IBM, Tesla and Google.

IBM is a company known for its hardware, but it's trying to change that. Hardware is out and the Internet of things is in — things like cloud computing, security and business analytics. (Video via WatchMojo, IBM)

A spokesperson for the company told CNBC that these newer areas saw revenue growth of 20 percent. But for the company as a whole, Monday's Q2 earnings report was still the 13th straight quarter posting year over year revenue declines, resulting in a big drop in investor support.

Tesla's stock also took a big hit Monday, following a report that downgraded the company from "neutral" to "sell," signaling to investors that now is a good time to take their money elsewhere.

That "sell" rating was thanks to a UBS analyst who called a Bloomberg report from May "misleading." The May report had gotten investors excited about Tesla's new battery, saying the company stood to make roughly $800 million based off deposits from interested parties.

The UBS analyst also set a new price target for Tesla's stock: $210, which is a lot lower than the stock was being traded at the time.

On the bright side, Google's stock is up — way, way up. In one day, after reporting Google's Q2 earnings, share prices jumped about 16.3 percent. The Wall Street Journal reported, "The increase was the second largest ever for a Nasdaq stock."

Two days prior to the earnings report, The Journal wrote a story explaining how the company was curbing its spending and hiring in an attempt to grow its core business and spend less time on "moonshots."

Google's new focus on making money comes at a time when many other tech firms are still taking a lot of risk. (Video via Google)

That risk is evident in a graphic produced by The Information. See those two dips in the red line around 1999 and 2014? Those represent tech companies going public while not turning a profit.

Some experts point to graphs like that to claim we're in the middle of another tech bubble, which could burst right as the U.S. is finally recovering from a recession.