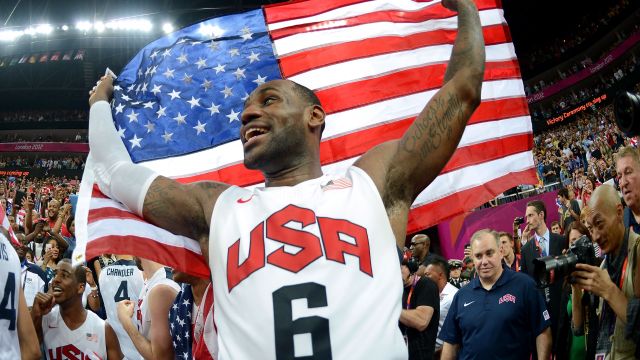 SMS
Team USA's Olympic Basketball Roster Is Missing Some Big Names
By Matt Moreno
By Matt Moreno
June 26, 2016
The roster for Team USA men's basketball is now finalized, but the team will be without names like Steph Curry, LeBron James and Kobe Bryant.
SHOW TRANSCRIPT

No Steph Curry. No LeBron James. No Kobe Bryant.

Team USA finalized its Olympic roster over the weekend, and it's looking a bit different than it has in years past, missing some big names that are usually on the shortlist.

Cleveland's Kyrie Irving and Golden State's (and soon-to-be unrestricted free agent) Harrison Barnes were reportedly the final two added to the roster over the weekend.

The Golden State Warriors, the team that finished with the best record in NBA history, are sending the most players to the Olympic Games with Green, Thompson and Barnes all reportedly joining the team.

Those three will be without teammate and two-time NBA MVP Steph Curry, though, who's staying back to nurse some nagging injuries.

As for the 2016 NBA Champions, only one player from the Cavaliers will be getting the invite — Kyrie Irving.

LeBron James told Cleveland.com last week that he could "use a rest," and who could really blame him?

As for one triumphant last hurrah for recently retired NBA great Kobe Bryant? Well, quite simply, it's not going to happen. Bryant shot down the idea of an Olympic run in January and reportedly hasn't changed his mind about it.

While the Olympic roster might be without some usual stars, Team USA is still a heavy favorite to win a third-straight gold. The 2016 Summer Olympics begin August 5.