Teachers At Chicago Public Schools Had A One-Day Strike 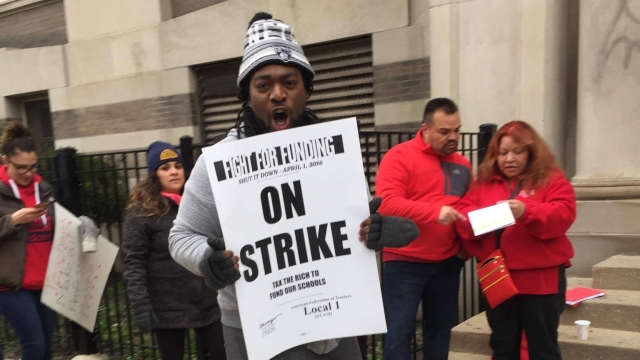 Teachers in Chicago Public Schools are saying they're fed up with a lack of educational funding, so many are on a one-day strike Friday, causing schools in the city to close.

Chicago Teachers Union Vice President said: "We are united. We're not taking no for an answer. We're going to fight for the schools our children deserve."

The protests — organized by the Chicago Teachers Union — put the school's budget deficit of $1.1 billion in the spotlight.

And the state of Illinois hasn't passed a budget in 10 months, putting a strain on many residents — especially students.

Chicago Public School's CEO said Friday was supposed to be "an instructional day with full attendance and that's why we find this so disappointing that kids are being robbed of a critical day of instruction."

In 2012, the Chicago Teachers Union also went on strike for a week. The union says unlike the previous strike, it "will be joined by much broader forces that are also suffering under the state's budget crisis."

Those broader forces include other organizations trying to gain traction for issues like labor laws and a higher minimum wage.

Legal action is expected from school officials, but teachers won't be punished. However, the district says union members who didn't show up for work Friday won't be paid.

There are several designated places students can go, like libraries, if parents can't watch them.