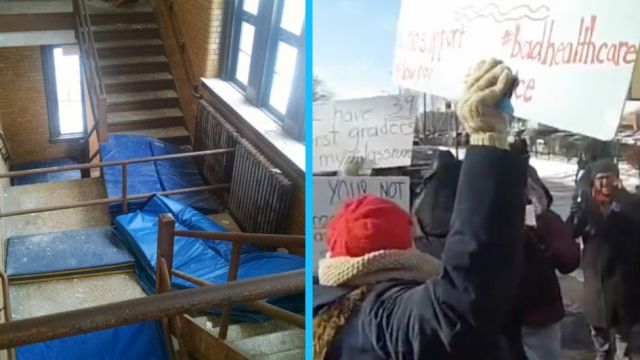 SMS
Teacher 'Sick-Outs' Shut Down Nearly All Detroit Public Schools
By Melissa Prax
By Melissa Prax
January 20, 2016
More Detroit schools shut down Wednesday as teachers stage "sick-outs" to protest what they say are terrible conditions in their schools.
SHOW TRANSCRIPT

Most of Detroit's schools were forced to close Wednesday, and not because of snow.

The city's teachers say they're tired of the terrible conditions in their schools. And now, many of them are participating in "sick-outs," or boycotting by calling in sick.

Leaking roofs, mold, broken heaters and myriad other complaints have some teachers saying they're actually getting ill.

Many schools have been closed since Monday. More than 20 additional schools closed Wednesday, bringing the total to more than 80 schools. (Video via WXYZ)

The sick-outs reportedly began Jan. 11 and are now getting national attention. President Obama is in Michigan for an auto show and plans to talk to Detroit's mayor about the teachers' complaints.

Other school staff members were told they needed to come to work on Wednesday, despite classes being called off. (Video via American Federation of Teachers)