Teach Your Kids To Code With Wonder Workshop's Bots 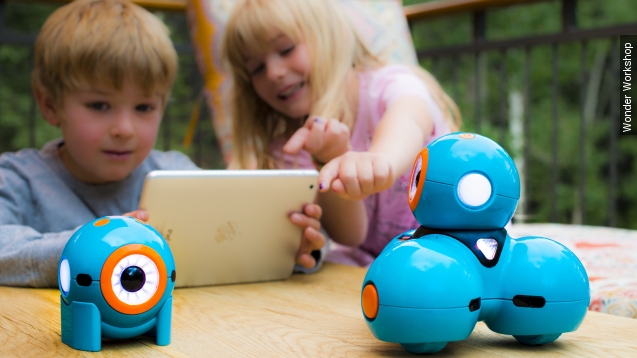 There’s almost nothing more marketable than the ability to code.

In fact, 5 of the 10 jobs on Forbes’ list of the highest paying, in-demand jobs in America are coding-based. And the others will almost certainly come in contact with the skill.

Which is why it’s increasingly important to teach youngsters how to code. And Wonder Workshop wants to help you with that.

Wonder Workshop has created two robots, Dash and Dot, that help kids learn how to code.

“Together with our apps, Dash and Dot makes coding easy and fun … from simple remote control movements to drag and drop programming, kids choose how they want to play.”

They’re designed for kids aged 5 and up. And as your child grows and learns, the robots can be used in new, more challenging ways.

A 5 year old may use the company’s “Go” app to control the robot’s lights, wheels and speakers.

While an 8 year old might use the company’s “Blockly” app to build tiny coding projects to manipulate their robots.

This project, for example, tells Dash the following:

• When you press the Start button, light up green.

• Then, move both sets of wheels forward at fast speed until it comes across an obstacle.

• When it comes across an obstacle, move backward at fast speed, say “Uh oh!,” light up red, and turn left 90º.

• Then, start over from the beginning.

This — of course — is how real-world coding works: tiny bits of instructions strung together to make our computers, smartphones, and even our smart refrigerators work how we tell them to.

Wonder Workshop’s Blockly app comes loaded with sample projects and puzzles, so your child can begin with some inspiration and tackle challenging coding projects.

There’s even an app called Xylo that lets your youngster make music.

That, however, will require an add-on you’ll need to buy in the Wonder Workshop store. The company also sells a bulldozer accessory, a smartphone mount, a tow hook, bunny ears and a bunny tail and a set of connectors that let you attach LEGOs to your Dash and Dot bots.

Now, most of the reviews we read mentioned Dash and Dot’s price as a prohibitive factor — Dash, alone, costs $170, and for the pair you’ll pay $230. And that price doesn’t include the accessories we mentioned before.

Still, the New York Times profiled Dash and Dot, along with a few other tech toys, and noted one major benefit — other than education — with toys like this: upgradeability.

“Because connected toys can acquire new capabilities over time, the Internet might even make toys less disposable. As soon as your child becomes bored with a toy, it might be able to do something new.”

So if you’re looking for a toy that’ll combat a child’s waning attention span while teaching them how to code, you can learn more about Dash and Dot at Wonder Workshop’s website.