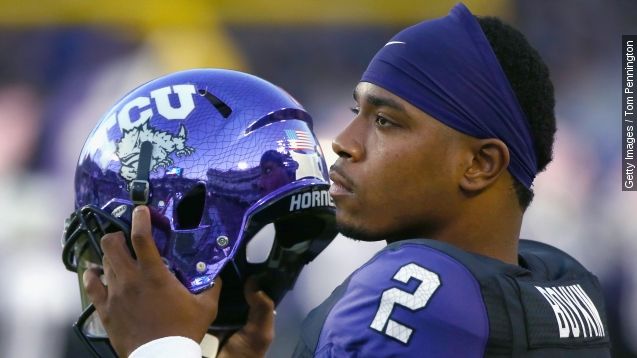 Texas Christian University quarterback Trevone Boykin was arrested Thursday morning after a fight at a bar in San Antonio.

Authorities say the senior TCU quarterback and friends were at a bar called Pat O'Brien's when some patrons recognized Boykin and started a verbal fight with him. Boykin was kicked out of the bar, but the fight continued outside.

Boykin reportedly threw punches and hit a San Antonio police officer. He struggled with officers until police threatened to use a stun gun. He was arrested and faces charges of assaulting a police officer, resisting arrest and public intoxication.

The arrest is two days before No. 11 TCU takes on No. 15 Oregon in the Valero Alamo Bowl in San Antonio. The Horned Frogs are 10-2 this season.

If Boykin is suspended for the bowl game, backup Bram Kohlhausen is expected to start.