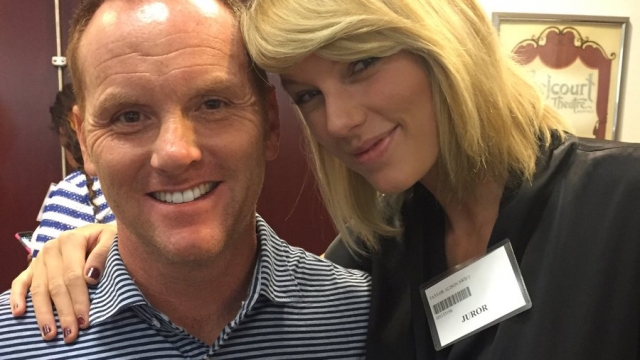 Some new pictures of Taylor Swift reporting for jury duty might explain her absence at Sunday night's Video Music Awards.

Swift was in a Nashville courthouse Monday morning posing with her fellow citizens, who were also reporting for jury duty. And it looks like the pop star's presence really lightened the mood of the civic chore.

Some speculated her skipping the VMAs might have something to do with her rocky VMA history with Kanye West.

During his moment at this year's VMAs, West alluded to the historic mic grab, as well as their more recent controversy over using her likeness in his music video "Famous."

The VMAs were held in New York City's Madison Square Garden for the first time in the award show's history. Mayor Bill de Blasio said in a release: "We are excited that MTV will bring the VMAs back to its original home of New York City. From the red carpet to the accolades to the performances — and everything in between — the VMAs are an incredible showcase for so many talented artists. It also goes without saying that hosting the awards in our City means a boost to our small businesses and restaurants and more jobs for the hundreds of crew members who work to bring the show into homes around the world."

Swift would have been serving on a jury for an aggravated rape and kidnapping case, but she was ultimately dismissed.