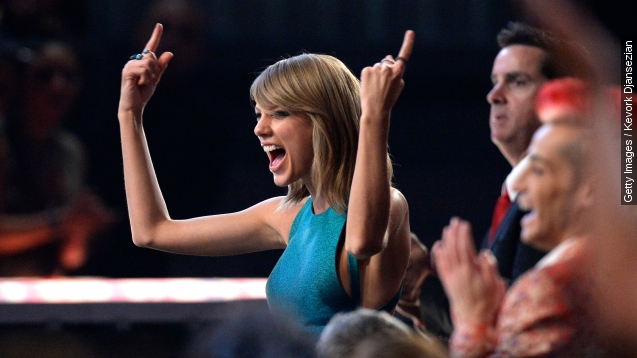 A Forbes story on the earnings of Taylor Swift's squad grabbed our attention — because, come on — who doesn't want to know how much you and your friends will never make together?

And the relationships all seem to be mutually beneficial. The visibility of Swift's model friends on her Instagram increases their worth in the fashion world because more eyeballs on a model's photo means she can charge more money.

For example, we only vaguely knew who Victoria's Secret Angel Martha Hunt was before she started hanging with the posse. Now, she has over a million followers across her social media accounts.

And just as Swift and her already-famous friends help one another out, Swift also lends a hand to rising stars like Kelsea Ballerini, rock band Haim and Rachel Platten.

And even though catapulting people to fame might seem like a selfless, friendly gesture for Swift (and it very well may be), there's an added benefit. (Video via Big Machine Records / Taylor Swift)

Look at her relationship with her fanbase. She promotes the idea that she's your best friend who just "gets" you.

Plus, she's brought celebrities on stage almost every night of her "1989" tour, guaranteeing media coverage. Really, it's genius. She generally has positive coverage, and she's never too far from the spotlight.

It's impossible to deny her star power. After all, she's now worth an estimated $282 million and has a steadily increasing Instagram following of over 47 million.

But she also exudes an unattainable #squadgoal and #lifegoal. She has the perfect group of friends, a hot DJ boyfriend and a killer career. Not exactly realistic life goals for the average person.

So next time you think about what Swift might be like behind closed doors, remember that every aspect of her life is considered a business opportunity. (Video via Big Machine Records / Taylor Swift)