Tax Plans From Trump And Bush Would Add Trillions To Deficit 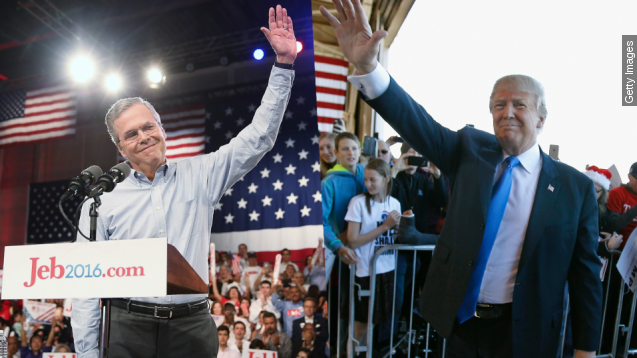 SMS
Tax Plans From Trump And Bush Would Add Trillions To Deficit
By Kate Grumke
By Kate Grumke
December 22, 2015
Analysis from the nonpartisan Tax Policy Center found some shortcomings in both tax plans.
SHOW TRANSCRIPT

"He came out the other day and said, 'I love Trump's tax plan," Trump said.

"The Tax Foundation looked at all of our plans and his creates, even with the dynamic plan, there would be $8 trillion deficit," Bush said.

But according to analysis from the Tax Policy Center, their tax plans have some things in common — including across-the-board tax cuts, especially for the wealthiest Americans. (Video via Donald J. Trump for President, Inc., Jeb 2016)

Both plans would also add to the national deficit and debt, but the Center says Trump's would add a lot more.

To put those numbers into perspective, George W. Bush's tax cuts in 2001 had a projected price tag of $1.35 trillion over 10 years.

Both candidates have said they hope to pay for their tax cuts by cutting the federal budget, although neither candidate has gone into specifics.

"We're going to cut out huge sections of, as an example, the Department of Education, environmental protection, it's disgusting what they've done," Trump said.

Both also say their tax cuts will stimulate the economy and make up for some of the deficit. Analysts say some growth could result from the plans — about 10 percent in GDP — but that's not nearly enough to balance out the tax revenue loss.