Taurasi Sitting Out In 2015 Presents New Problems For WNBA 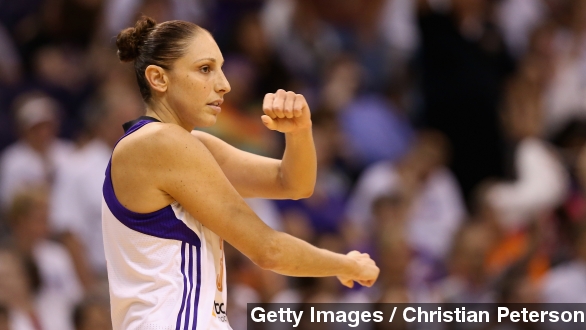 SMS
Taurasi Sitting Out In 2015 Presents New Problems For WNBA
By Christian Bryant
By Christian Bryant
February 4, 2015
Diana Taurasi will sit out for the 2015 WNBA season, so she can rest and prepare to play for her Russian team. Could other players do the same?
SHOW TRANSCRIPT

What if I told you the best player in the NBA, NFL or MLB decided to sit out a year to play in an overseas league. Like, if LeBron James took his talents to Spain or Tom Brady left Foxborough, Massachusetts for ... Finland.

That's essentially what's happening for one WNBA player. Diana Taurasi, three-time WNBA champion and two-time WNBA Finals MVP, announced this week she's sitting out the 2015 season to rest up for her other team — in Russia.

Taurasi would make nearly $110,000 playing for the Phoenix Mercury in 2015. Compare that to her $1.5 million salary in Russia. Plus, her Russian team will compensate her for the salary she won't be getting from the WNBA. She made it pretty clear in an open letter to fans her decision was at least partly about the money.

What's less clear is how Taurasi's decision will affect the WNBA and if other players will follow in her footsteps.

For some background, Taurasi has been playing for her current Russian team during the WNBA offseason since 2012. In fact, lots of WNBA players split time between teams in the U.S. and teams overseas. This list from 2013 shows 96 WNBA players divided among 14 countries.

WNBA players pulling double-duty is common, but Taurasi is the first high-profile player to temporarily jump ship to concentrate on overseas play. And there's nothing keeping other players from doing the same thing.

ESPN's Kate Fagan says this should be concerning to the WNBA and suggests the league rework its salary structure to stave off a mass exodus of top-notch players.

"The WNBA needs to consider paying its stars more share of the salary. And the other thing is that in the WNBA, there are a lot of coaches making twice what Diana Taurasi makes. There are some making almost three times what she makes," Fagan said.

Even if the league were interested in considering those changes, it's unsure when that could happen. The league and players just recently agreed to a new collective bargaining agreement that'll last until 2021. Under that agreement, the maximum player salary will get additional money, from $14,000 up to about $121,000 over the next six years.