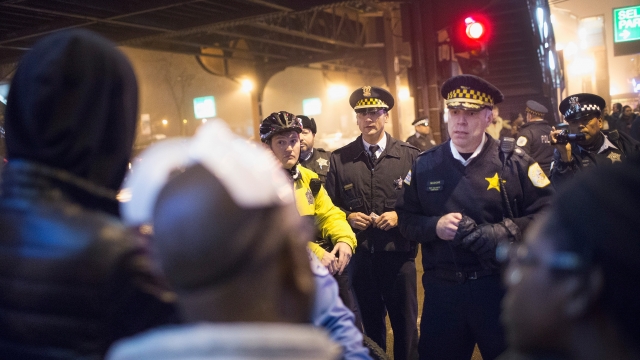 Woefully inadequate. Persistent problem. Justified lack of trust. Those are just a few of the phrases used to describe the Chicago Police Department in a scathing report released Wednesday.

The racial divide in Chicago's population is about equal — 32 percent of the city is white, 33 percent is black and 29 percent is Hispanic. Keeping that split in mind makes some of the report's data even more alarming.

There were more than 400 officer-involved shootings between 2008 and 2015, and 74 percent of the people hit or killed were African-American.

During traffic stops, black and Hispanic drivers were four times more likely to have their cars searched than white drivers, but contraband was found in the vehicles of white drivers twice as often.

The task force also points a finger at the department's accountability system, calling it "broken."

From 2007 to 2015, 1,572 officers had 10 or more community complaints filed against them. Sixty-five officers received 30 or more complaints during those nine years. From 2011 to 2015, 40 percent of complaints were never fully investigated.

The task force wrote: "There is no ownership of the issue within CPD leadership or elsewhere. ... These figures demand immediate change."

So how do you make that change happen? The report lists more than two dozen detailed recommendations that aim to empower the community, improve accountability and address other systemic problems.

At least one of the report's recommendations, expanding the department's body camera program, is already underway. Earlier this week, Chicago's mayor announced more than 450 body cameras are being shipped to the city this week.

The process of reforming the Chicago Police Department could take awhile, but it seems the new superintendent, Eddie Johnson, confirmed the same day the report was released, is committed to the task.

The video includes clips from WMAQ, CLTV, and WLS-TV and images from Getty Images and the Chicago Police Department.