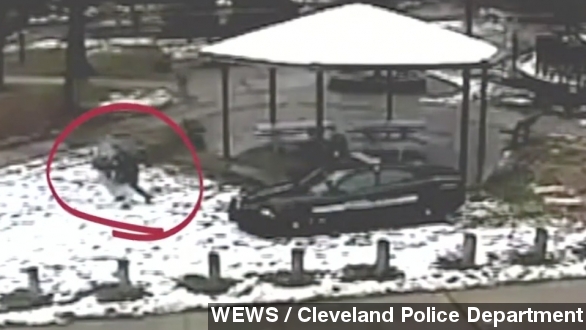 There've been mixed reactions to the new surveillance footage that shows what occurred after 12-year-old Tamir Rice was fatally shot by police in November.

First, here's what happened: after shooting Rice, Cleveland police tackled a teenage girl sprinting across the complex who was later identified as Rice's sister. She was then put in hand-cuffs, placed in the back of their patrol vehicle and locked inside for more than 25 minutes.

Upon witnessing the footage, the family released a statement saying, "This video shows in crystal-clear HD that the responding officers acted inappropriately and recklessly. ... The family is outraged."

"Criminalized by being placed in the back of the cruiser just feet away from her brother helplessly there to watch him die," Rice family attorney Walter Madison said.

Meanwhile, the president of the Cleveland's police union thinks otherwise. He says the officers handled the situation the right way.

"That young lady would not calm down. She was put down on the ground and she was placed in the police car, which was the safest place for her," Cleveland Police Union President Steve Loomis said.

WEWS spoke with a private investigator and former Kentucky police chief. He says the officers followed correct protocol with Rice's sister because it was an active crime scene.

He also says, in that type of situation, it's a top priority to get Rice proper medical attention as soon as possible.

"Anytime you've got a person who's down, you need to be able to have someone who steps in as soon as possible and take care of any emergency medical needs right at the beginning," Private investigator Ross Riggs said.

The controversy over the extended surveillance footage adds yet another layer to the Tamir Rice case.

And just days before that, Rice's family filed a wrongful death lawsuit, claiming the rookie officer who shot and killed her son acted negligently.