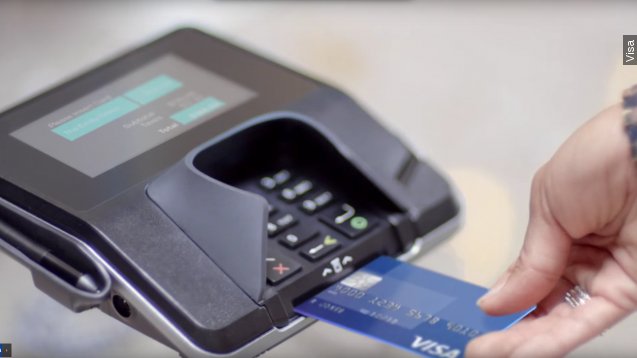 SMS
Talk About Missing A Deadline: Stores Still Aren't Ready For EMV Cards
By Melissa Prax
By Melissa Prax
November 26, 2015
Credit cards with chips in them may be safer, but many consumers are using the magnetic strips on them because stores haven't updated their terminals.
SHOW TRANSCRIPT

Has your bank recently sent you a new credit or debit card with a chip inside?

Most cards with a chip still have a magnetic strip because a lot of stores didn't adhere to card companies' Oct. 1 deadline to install machines where these cards can be "dipped," or the equivalent to swiped. The advantage with these cards? They're safer and less vulnerable to fraud than the kind with with just the magnetic strip

By the end of the year, the American Bankers Association says 70 percent of card holders will have a new chip-embedded card. This is in part thanks to a federal initiative by the government to "lead by example," by issuing the cards for governmental uses. (Video via Capital One)

But even if stores do have the new terminals, these transactions can take longer for consumers who aren't familiar with how to use the cards. Plus the terminal takes longer to process the sale.

So if you have a credit card without a magnetic strip, you might want to bring a backup in case the store you're at doesn't accept it, as well as a little extra patience.