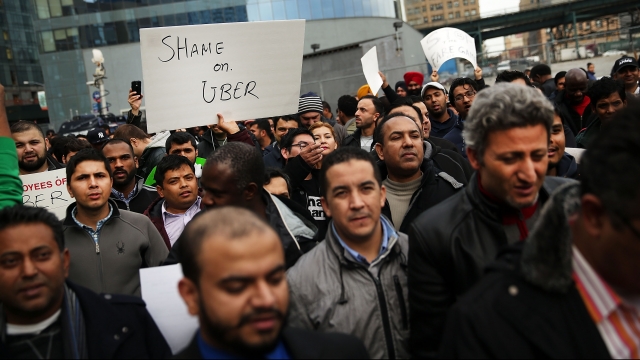 SMS
Taken For A Ride? NYC Uber Drivers Aren't Happy About Fare Cuts
By Cody LaGrow
By Cody LaGrow
February 1, 2016
Some Uber drivers in New York City want to see a decrease in the commission taken by the company.
SHOW TRANSCRIPT

"They're cutting our fare 15 percent, and the commission, they still cut the same commission," an Uber driver explained.

It's better ... unless you're an Uber driver.

"They're making us work more hours to make the same amount of money that we used to make," another Uber driver said.

Some drivers would like to see a fare increase or a reduction in the commission they pay Uber.

"If they want to make the customer happy, right, don't lower the fare, but lower the commission for the drivers. Keep us happy," one Uber driver suggested.

Uber said the price cut can boost ridership for drivers while decreasing their idle time.

Now some drivers plan to go on strike and log out of their Uber apps in an effort to affect the service.