Take Nestlé's Fat-Burning Drink Story With A Grain Of Salt 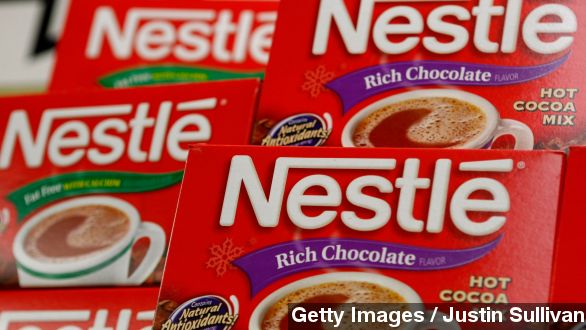 SMS
Take Nestlé's Fat-Burning Drink Story With A Grain Of Salt
By Steven Sparkman
By Steven Sparkman
November 24, 2014
Nestlé, a company more known for sweets than health food, could be getting into the business of weight-loss supplements.
SHOW TRANSCRIPT

If you're not one of the lucky few of us that actually enjoy a morning jog or a spin class, easy weight loss in a pill is still the dream.

Americans spend an estimated $2 billion a year on supplements that claim to boost metabolism, suppress appetite or make us thinner in one way or another. (Video via Hydroxycut, Xenadrine)

It can be hard to tell which, if any, of those products actually work, which you'll know if you've tried a few yourself. But when a big-name company like Nestlé says it's developing its own fat-burning potion, even some of the most jaded consumers will pay attention.

Last week, the company announced a team of health scientists were developing a compound that can mimic the effect exercise has on your metabolism — "Unlocking the metabolic 'master switch'" as they called it.

A paper in the journal Chemistry & Biology earlier this year detailed their creation, Compound-13, and its effects on the body's energy systems. It's been described in the media as "exercise in a bottle," a way to get fit while avoiding the gym.

One KNBC anchor admitted, "The idea of having a Nestlé Quik instead of going to that aerobics class, I'm in."

But you know by now that these stories always come with a catch, right? In this case, several catches.

The first is that the company says Compound-13 won't replace exercise, just boost its effects. You'll still have to lace up.

Second, the chocolate company's compound is still in early testing. Lots of products that look promising in the beginning fail to pan out, so you may never get that fat-burning Kit Kat.

And third, let's be honest: the diet pill industry has a really dubious past.

Miracle weight loss supplements are a dime a dozen, many of them promoted in front of wide audiences by figures like Dr. Oz.

"And now I've got the number one miracle in a bottle to burn your fat. It's raspberry ketone."

But government health sites warn that not nearly enough research has been done on weight-loss supplements to call any of them truly effective. And some supplements can actually be dangerous, resulting in things like liver failure.

Fox News contributor Dr. Nina Radcliff said, "Any time we get news that there's an innovation that can help us lose weight without breaking out a sweat, we get excited. But we need to take it with a grain of salt. ... Don't forget Fen-Phen."

Still, it would be nice to have an extra tool in the fitness toolbox, so there's probably no harm in crossing our fingers and hoping Nestlé gets it right.