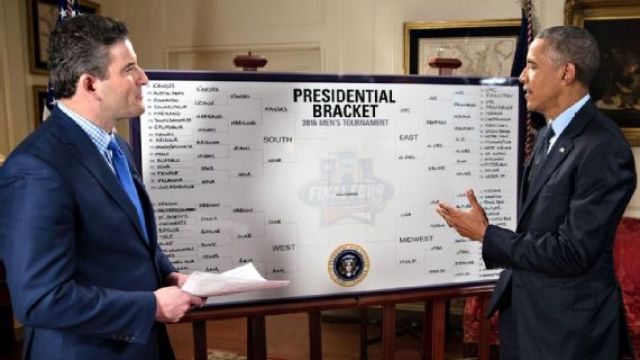 "You gave your fans all across America one more reason to chant 'Rock Chalk Jayhawk,'" President George W. Bush said.

The Kansas Jayhawks were one of the last sports teams Bush welcomed to the White House during his presidency.

Obama is going all-in on KU for the 2016 college basketball men's tournament, picking the Jayhawks to defeat North Carolina in the finals.

The Jayhawks (30-4) are the top-ranked team heading into the tournament, riding a 14-game winning streak.

While Obama, a longtime basketball fan, is great at a lot of things, he's not the best when it comes to predicting the tournament's winners.

Of the seven NCAA March Madness brackets Obama has filled out (or at least officially posted) since his presidency, he's picked the correct champion just once — back in 2009.

Obama picked the North Carolina Tar Heels to win it all, but it appears he was even unsure about that one. That was close.

But let's be honest with ourselves — most of our brackets get busted too. No one's doing TV specials on us, though.