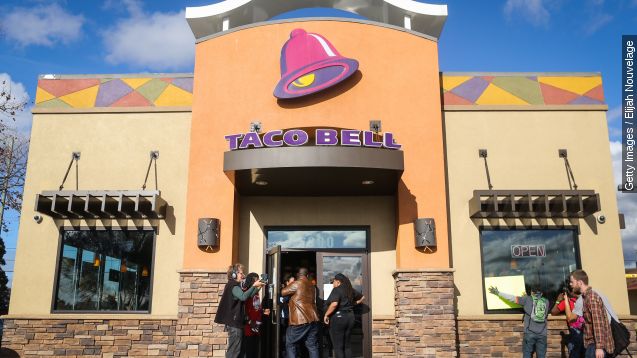 SMS
Taco Bell Jumps On 'Natural' Ingredients Bandwagon
By Jamal Andress
By Jamal Andress
May 26, 2015
Taco Bell says it plans to remove all "artificial flavors and colors, replacing them with natural alternatives" by the end of the year.
SHOW TRANSCRIPT

Kraft, McDonald's, Nestle and Panera Bread have all taken the step that Taco Bell announced it would be taking today: removing certain ingredients from its menu — which some believe are unhealthy — to appeal to more customers.

More specifically, Taco Bell plans to remove all "artificial flavors and colors, replacing them with natural alternatives" by the end of the year. And by the end of 2017, Taco Bell says it will "remove additional artificial preservatives and additives where possible."

According to Taco Bell, this change in its menu will affect 95 percent of the company's food items, but it will not apply to beverages or co-branded items.

In other words, your Cool Ranch Doritos Locos Taco will be fine.

Taco Bell says it will make all of these changes without changing its price point. CEO Brian Niccol told Bloomberg: "People just assume that in order to do this, things have to become more expensive. That's a myth."

All of this comes after Taco Bell's renewed effort to fight McDonald's for the fast food breakfast market with a major ad campaign and new menu items.

It's too early to say if the purge of artificial ingredients will do anything for Taco Bell, but the famous fast food chain and its parent company, Yum Brands, has had a great year on the back of its new breakfast.

Yum Brands stock price has risen more than 15 percent since last year, and during the second quarter, Taco Bell had record-breaking sales numbers due in large part to an increase in breakfast sales.

This change in menu also applies to Yum Brands company Pizza Hut, but there's no word on whether KFC will join the all-natural party.