Taco Bell Is Going To Test Out Cheetos Burritos 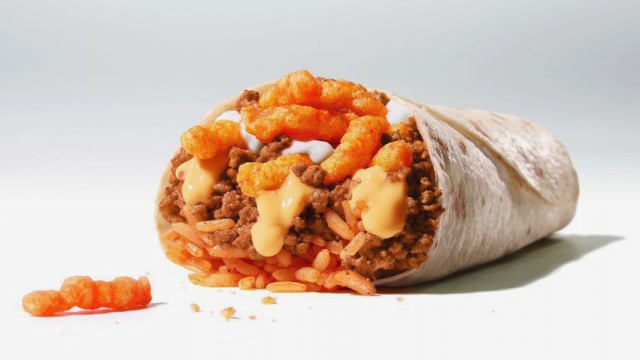 SMS
Taco Bell Is Going To Test Out Cheetos Burritos
By Ryan Biek
By Ryan Biek
July 31, 2016
The fast-food giant will begin testing its latest creation in mid-August.
SHOW TRANSCRIPT

We're sure someone out there's dancing over Taco Bell's latest creation.

The fast-food giant will begin testing a new addition in mid-August, but Canadians have had this culinary luxury for a while now. Cheetos Crunchwrap Sliders debuted up north earlier this year, but it will be the first time the company's featured the chip on its menus in the U.S.

It's not like this move means Taco Bell is entering a brave new world of Mexican fast food, though. The Cheetos burrito seems conspicuously like the company's Beefy Fritos burrito, just with, you know ... Cheetos.

At least with the Doritos Locos taco the company used the chip as the taco shell.

Innovation may be less on Taco Bell's mind than competition, though. Burger King launched its limited edition Mac n' Cheetos at the end of June.

The bad news for Taco Bell fans is the Cheetos burrito will only debut in Cincinnati. But when it's set to be sold for just $1, a cross-country pilgrimage may be the tiniest bit worth it.