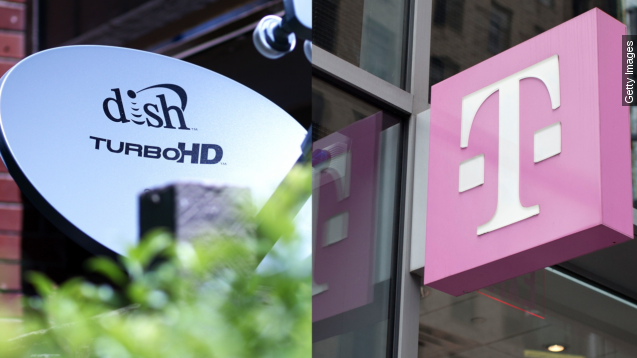 We may have another merger on our hands. T-Mobile and Dish Network are reportedly in talks for a merger, although those talks are currently in "the formative stage."

According to a new report from The Wall Street Journal, if T-Mobile and Dish Network are able to agree on a merger, they've already ironed out leadership details.

"I've got a lot of sh-t on my mind. This is the part where you're supposed to smile," said T-Mobile CEO John Legere.

T-Mobile's offbeat CEO John Legere will keep his C-level title, moving into position as the CEO of the combined companies.

And Dish Network CEO Charlie Ergen will serve as chairman of the board.

Interestingly, here's what he had to say about the recent, failed Comcast-Time Warner deal: "I think it should be blocked ... I don't think you can give that connectivity — you can't give one company over majority of the homes in the United States."

So what can the companies gain from a possible merger? The Journal suggests it has a whole lot to do with wireless connectivity. Dish has "billions of dollars of wireless licenses," and T-Mobile has the cell network to put those licenses to use. A bigger, better network gives the company plenty of space for new subscribers. (Videos via Dish Network, T-Mobile)

Re/code paints a much more desperate picture for the merger: "A deal between Dish and T-Mobile is akin to two people who hook up because they are the last ones left in the bar at closing time."

That's because loads of merger opportunities have fallen to the wayside. AT&T has found a partner in DirecTV, Charter is buddied up with Time Warner Cable, and T-Mobile failed to join with Sprint in the past.

Still, Variety remains a bit uncertain about the deal, pointing to Ergen's reputation as a negotiator. "Dish has tangled recently with both Time Warner and 21st Century Fox, letting popular cable networks like CNN and Fox News Channel go dark as Dish and those companies haggled over carriage terms." (Video via The Wall Street Journal)

Financial terms of the deal are still unknown, and it's important to note talks in "the formative stage" can still fall through.

This video includes images from Getty Images and commorancy / CC BY NC ND 2.0, and music from Brenticus / CC BY 3.0.