T.J.Maxx To Follow Wal-Mart's Lead, Raise Wage To $9 An Hour 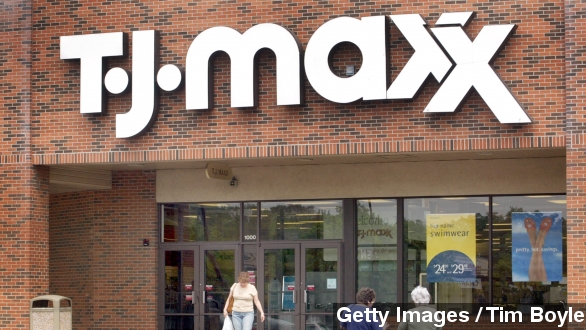 SMS
T.J.Maxx To Follow Wal-Mart's Lead, Raise Wage To $9 An Hour
By Jamal Andress
By Jamal Andress
February 25, 2015
TJX Companies said it will raise pay for all of its full- and part-time employees to $9 an hour starting in June.
SHOW TRANSCRIPT

It seems when the big retail domino falls, the smaller ones are soon to follow — in this case, that's retail giant TJX Companies.

"The company says it's going to be joining with a handful of retailers who say they are going to be permanently raising wages."

TJX is the owner of retail chains T.J.Maxx, Marshalls, HomeGoods and a few others. It claims it will raise pay for all its full- and part-time employees to $9 an hour starting in June. In 2016, any employee who has worked at the company's stores for more than six months will get another pay raise to $10 an hour.

"It's clear to me that one of the highest priorities today must be an investment in you, our associates," Wal-Mart CEO Doug McMillon said.

TJX's CEO said in a statement about the pay raise, "This pay initiative is an important part of our strategies to continue attracting and retaining the best talent in order to deliver a great shopping experience."

With huge companies like Starbucks, Wal-Mart and TJX raising their minimum wage in the past year, it seems a trend has begun among the major retailers. But according to The Wall Street Journal, Target has no plans on joining the party.

Target's CFO told The Journal: "We're all the time assessing the marketplace to determine competitive wages. ... We feel very confident that we’ll be paying the teams appropriately."

TJX doesn't have the best outlook on share price for 2015, much of that is due to a strong dollar and weak world economy. Still, its most recent earnings results, $8.3 billion in net sales, is a 6 percent increase compared to this time last year.