Syriza On Course For Victory In Greek Election 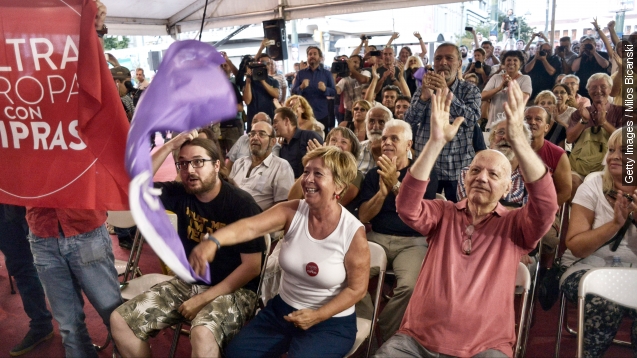 SMS
Syriza On Course For Victory In Greek Election
By Evan Thomas
By Evan Thomas
September 20, 2015
Greece's left-wing Syriza Party has about a third of the votes in early results.
SHOW TRANSCRIPT

Alexis Tsipras and his Syriza party are on track to win Greece's election with 35 percent of the vote and climbing. (Video via Alexis Tsipras)

Vangelis Meimarakis, of the second-place New Democracy party, has conceded. This gives Syriza more of a mandate. (Video via Euronews)

Meanwhile, smaller players in Greece's politics are moving up in Parliament.

The far-right Golden Dawn party polled at 7-8 percent in early results — enough for 20 seats. Members expect its share to grow. (Video via Bloomberg)