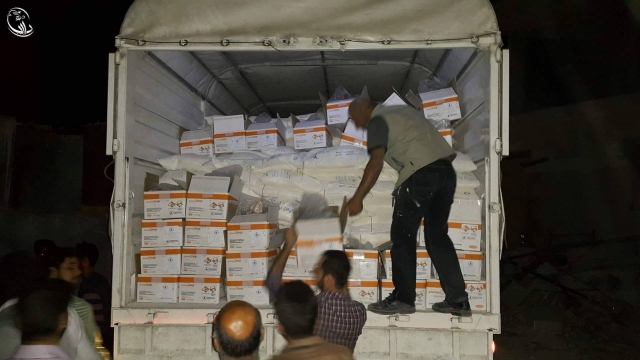 On Friday, the city of Daraya, Syria, received food aid for the first time since 2012.

But witnesses report that not long after the food was delivered, forces loyal to Syrian President Bashar al-Assad began bombing the town, making it difficult for locals to distribute the aid.

Aid deliveries like this one are often delayed by the Assad government, which often uses bureaucratic red tape to stall aid workers.

In a statement, the World Food Programme said it provided enough food baskets to feed 2,400 people for about a month, but Daraya has a population of about 8,000 people.

A local council member told the New York Times he was thankful for the food but that "the food baskets won't cover the whole number. Every person won't get one whole basket."

The Syrian regime approved aid deliveries to 15 besieged areas in the country this month, but the U.N. Syria envoy warns that doesn't guarantee delivery. And oftentimes they're followed by government retribution — like the reported bombings in Daraya.

Last month, the International Syria Support Group, a 17-nation group trying to end the civil war, demanded Assad allow aid groups easier access to civilians, but so far he hasn't. Their next step may be aid airdrops.

This video includes clips from The United Nations, the Daraya Media Center and the Daraya Local Council, and images from Getty Images.