Violence Continues In Aleppo, But Syrians Are Celebrating 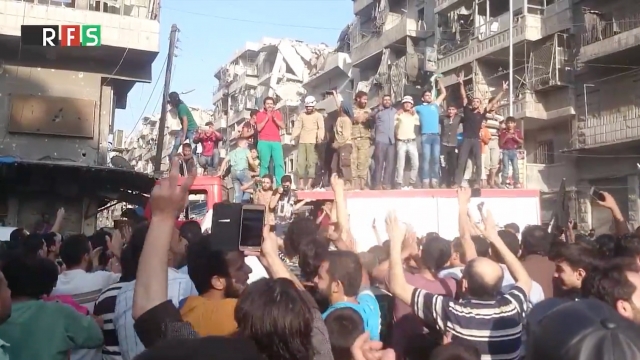 SMS
Violence Continues In Aleppo, But Syrians Are Celebrating
By Melissa Prax
By Melissa Prax
August 7, 2016
Syrians in Aleppo are cheering on rebels who have reportedly ended the government's monthlong siege. But the regime says it's pushing back.
SHOW TRANSCRIPT

These Syrians are celebrating.

That's because rebel groups reportedly broke the government siege on Aleppo that cut off hundreds of thousands of civilians from food and aid for a month.

Rebel groups first started advancing on the city in early August and symbolically blew up the regime's headquarters.

The celebration is likely premature, since fighting is still going on in the city. But some media report the celebrations are meant to cheer rebels on.

Since the rebel takeover, violence — like Russian airstrikes on rebel targets — has ramped up.

And while the rebels and humanitarian groups have said the siege is over, the Syrian government says it's been able to push back.