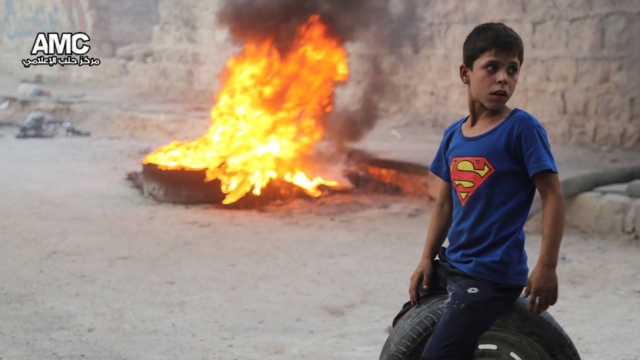 SMS
Syrian Kids Are Burning Tires To Create A DIY No-Fly Zone
By Jake Godin
By Jake Godin
August 1, 2016
Syrians in rebel-held east Aleppo have resorted to burning tires to try to prevent airstrikes from Russia and the Syrian regime.
SHOW TRANSCRIPT

These kids are making their own no-fly zone by burning tires in Aleppo.

Some are even apologizing to environmentalists.

The goal is to halt Russian and Syrian regime airstrikes.

Opposition-held east Aleppo is completely surrounded by the regime. Hundreds of thousands of people remain in the besieged area.

The regime and Russia have offered civilians passages out. But they all go to regime territory, and some civilians fear they could be imprisoned or killed.

Rebel groups are now trying to lift the siege with an offensive south of Aleppo. That includes the rebranded Al-Qaeda ally, Jabhat Fateh al-Sham.