Syria's Besieged Towns Remind Some Of A Conflict In The '90s 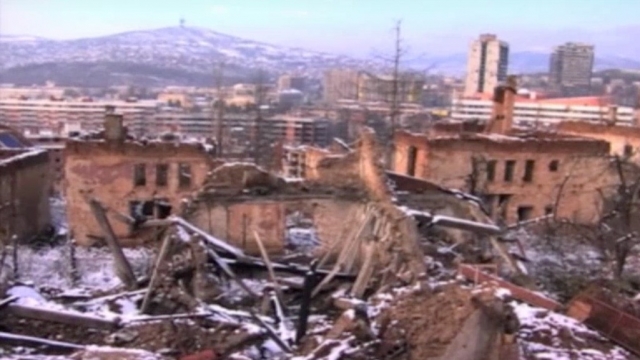 SMS
Syria's Besieged Towns Remind Some Of A Conflict In The '90s
By Melissa Prax
By Melissa Prax
February 24, 2016
Sarajevo, the capital of Bosnia and Herzegovina, was the longest besieged town in modern warfare, and some see parallels in the Syrian conflict.
SHOW TRANSCRIPT

Syrian cities are cut off from resources — and some say there are warning signs of a longer siege.

They point to Sarajevo, the capital of Bosnia and Herzegovina. The city still holds the top spot for the longest besieged town in the history of modern warfare.

Sarajevo endured a siege for almost four years in the '90s during the Bosnian War. Thousands were killed and injured; many became refugees.

The siege of Sarajevo ended over 20 years ago, but lingering effects remain, like ethnic divisions.

The connection between Syria's besieged cities and Sarajevo is startling for some who worry Syria's turmoil could give way to years of similar divides in these towns, specifically Aleppo.

"So there is a humanitarian disaster now in the making," said Michael Fallon, British secretary of state for defense.

Blame from Western countries often falls on Russia's airstrikes, the Syrian regime for subjecting civilians to violence and, of course, terrorist groups.