Syracuse, A No. 10 Seed, Somehow Makes It To The Final Four 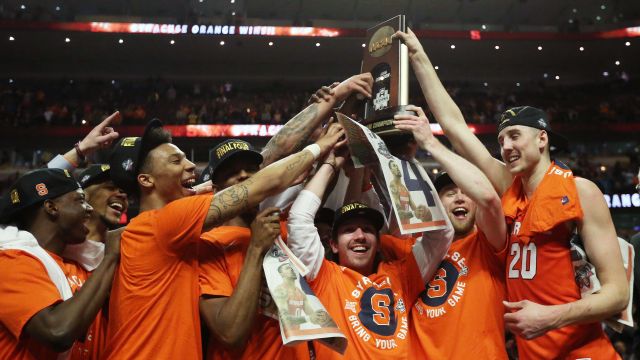 SMS
Syracuse, A No. 10 Seed, Somehow Makes It To The Final Four
By Matt Moreno
By Matt Moreno
March 28, 2016
The Syracuse Orange defeated the Virginia Cavaliers on Sunday, continuing their improbable run through the NCAA Men's Basketball Tournament.
SHOW TRANSCRIPT

Everyone called you names when you had a No. 10 seed in the Final Four, but here they are.

The Syracuse Orange are heading to the Final Four after making an improbable run through college basketball's finest in March. Syracuse beat No. 1 seed Virginia on Sunday night.

So far, Syracuse has knocked off No. 7 seed Dayton, No. 15 seed Middle Tennessee, No. 11 seed Gonzaga and No. 1 seed Virginia.

The run is even more unimaginable considering some believe Syracuse shouldn't even be in the tournament.

Finishing the season at just 19-13, good for 9th in the ACC, the Orange were considered long shots for making the tourney. But the committee added them in and they've responded with a vengeance.

"We had [Syracuse head coach] Jim Boeheim on two weeks ago. ... He said he woke up that Sunday morning 90 percent sure that his team wasn't going to make the NCAA Tournament, and now here they are on their way to Houston," ESPN's Mike Greenburg said.

As ESPN points out, at least one 'Cuse faithful dropped $100 on the Orange winning the whole thing. That ticket would net the bettor more than $100,000 if it comes true.

Now, Syracuse will have arguably its toughest test to date — the daunting No. 1-seeded North Carolina Tar Heels. The two tip off Saturday.

This video includes clips from Syracuse University and CBS, and images from Getty Images.