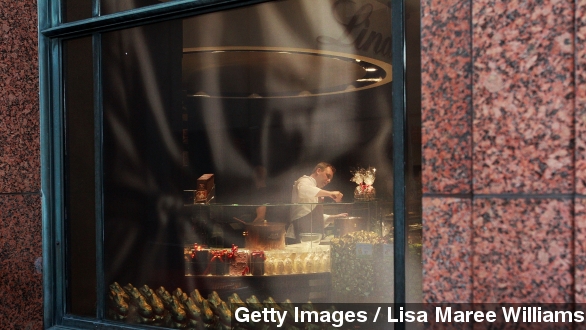 It's only been three months since Sydney's Lindt Cafe was taken under siege — 17 people were held hostage, two of which were killed along with the gunman. But in a show of strength and perseverance, Lindt Cafe reopened its doors Friday.

"This city was tested, it was challenged, but today is a strong reminder that we march forward," said South Wales Premier Mike Baird.

CNN reports: "In December, a gunman took 17 people hostage in the cafe, sparking a 16-hour standoff by police, as you'll remember. The gunman was killed by police, but not before he killed one hostage. A second hostage then died later in that gun battle."

In support of the reopening, hundreds of people lined up outside the cafe at sunrise.

"It was packed from regular customers to those who had never been but felt they had to come today. It was sweet. ... And by the door in gold, tributes for Lindt manager Tori Johnson adorned with a sunflower and barrister Katrina Dawson. Her nickname was 'Tree,'" a 7News reporter said.

Among those in attendance during the reopening was Joel Herat, one of the cafe workers who survived the siege.

"It was extremely important for me to be here and support Lindt and support the people I work with. ... Working with these people here, it's helped a lot in the healing process," he told ABC Australia.

The decision to reopen was one discussed at length among Lindt executives who ultimately decided "reopening and moving forward is the best thing to do for everyone affected."