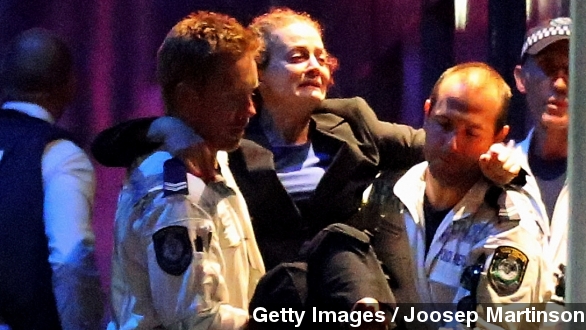 Officials in Sydney are now reporting three people — including the suspected gunman — are dead following a raid that ended a 16-hour hostage situation early Tuesday in Australia.

New South Wales’ police commissioner confirmed the two hostages killed are an unidentified 34-year-old man and a 38-year-old woman. Three other hostages and a police officer were also reportedly injured. (Video via Channel 4)

As Fox News reports, one female hostage was shot in the leg and a male under a “blood-soaked sheet” was carried out on a gurney.

"We can see some heavily armed policemen and flashes of gunfire," ABC Australia reported.

Police stormed the building at around 2 a.m. local time. A group of hostages ran out of the building after the police moved in. Police later sent in a bomb-disposal robot to sweep the area.

Five hostages fled the scene of the Lindt Cafe earlier in the day, though it's not clear if they were released or managed to escape. (Video via RT / 7News)

Prior to the raid, the gunman was identified by police as 50-year-old Man Haron Monis. An Iranian refugee, Monis is accused of several violent offenses, including organizing the murder of his ex-wife. (Video via NineMSN)

So far, police have not connected Monis to a larger terror group.

“It is an isolated incident. Do not let this sort of incident bring about any loss of confidence about working or visiting in our city,” the police commissioner said.

According to officials, all 17 hostages are now accounted for.