Switch From iPhone? Here's How To Deregister iMessage 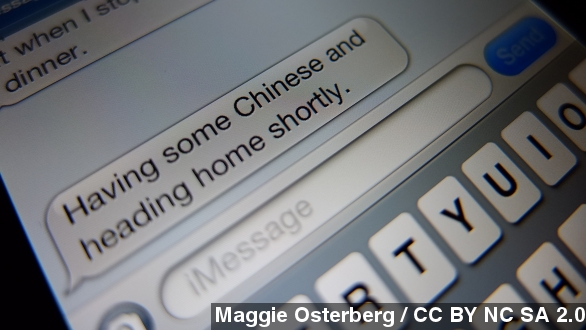 SMS
Switch From iPhone? Here's How To Deregister iMessage
By Mikah Sargent
By Mikah Sargent
November 10, 2014
Apple has created a web tool for users to deregister their phone numbers from its proprietary iMessage service.
SHOW TRANSCRIPT

Making the switch from an iPhone to any of the hundreds of other smartphone brands can be a bit of a hassle.

Especially if you've tied your data into many of the services for iOS — calendar, mail, health and messages to name a few. (Video via Apple)

But it's that last one — messages — that's been the biggest hassle. Users leaving behind their iPhones for something else would sometimes fail to receive messages from their iPhone-toting friends.

When iPhone users send other registered iPhone users a message, it's sent via Apple's proprietary messaging service, known as iMessage. But if a user makes the switch from iPhone and forgets to disable iMessage, other iPhones will still try to send those texts to the user via iMessage.

And, as you probably guessed, Apple's iMessage service isn't compatible with Android, Windows Phone or any number of other mobile operating systems. (Video via Phandroid)

Now it's a bit easier to make the switch. Apple has created a special support page for deregistering phone numbers from iMessage.

Enter your phone number, receive a confirmation code, enter said confirmation code and click submit. The company also reminds users if they've still got their old iPhone handy, they can deregister via the phone's Settings app — you just slide the switch on iMessage.

A writer for The Verge suggests a feature like this is meant for those who regularly switch phones.

"If you don't switch devices often, the new tool may seem insignificant, but for those who often swap SIM cards into different devices for work, it should make the transition smoother."

And we can't forget Apple in mid-May was sued because of the iMessage problem. The lawsuit was centered around alleged "contractual interference and unfair competition laws."

So even if a small fraction of its users are frequent phone switchers, the move is definitely one of those "better safe than sorry" scenarios.

If you've made the switch from iPhone and forgot to disable iMessage on the device, head over to Apple's support page to deregister your number.

This video includes images from Kārlis Dambrāns / CC BY 2.0.