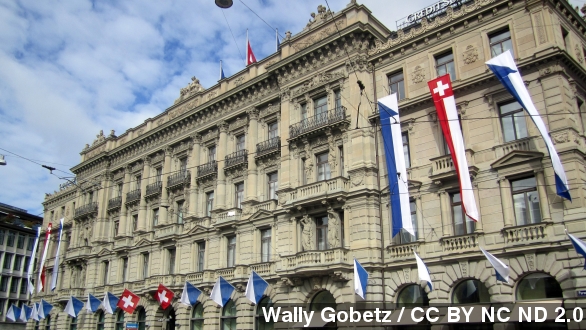 Switzerland wants to keep money out of the country. That’s how bad the rest of the world’s economies are. The world’s most iconic banking nation is effectively issuing penalties to keep outside money from coming in.

The Swiss National Bank put out this statement Thursday confirming it was discontinuing the current minimum exchange rate from Swiss francs to euros and dropping interest rates to -0.75 percent.

No central bank in the world has ever set an interest rate so low. Since the start of the Eurozone crisis in 2010, many investors have sent money to Switzerland, a spot they hoped would be a safe haven from the more volatile world market.

Flattering, of course, but not when so much money comes in that the franc rises to a level that makes it tough for the Swiss economy to get by. (Video via Euronews)

The recent tension can be attributed to the surprisingly large and lengthy drop in the price of oil. (Video via Sky News)

As Geoffrey Smith points out, "Central banks usually like to ‘look through’ the impact of changes in commodity prices, which are historically volatile and notoriously difficult to predict."

But European Central Bank board member Benoit Coeure recently cited oil prices when he told a German newspaper, "We do indeed want to screen out short-term effects, but it's becoming more and more difficult to keep to this." (Video via BFMTV)

Once the SNB removed the floor for the franc-euro exchange rate, the euro dropped significantly and still only recovered to just better than 1 franc per euro.