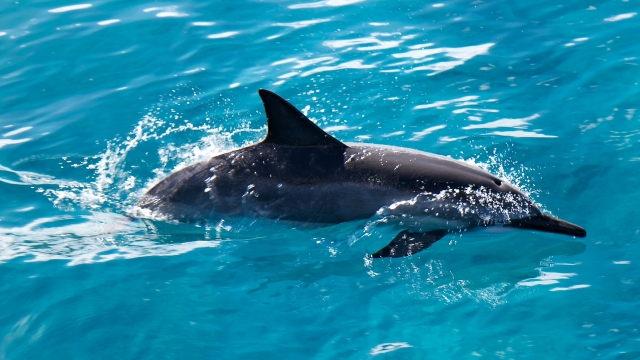 SMS
Swimming With Dolphins In The Wild Could Soon Be Banned In Hawaii
By Briana Koeneman
By Briana Koeneman
August 24, 2016
Spinner dolphins are nocturnal, and all that contact with humans during the day is stressing them out.
SHOW TRANSCRIPT

One of Hawaii's most popular tourist activities may soon be illegal.

Federal regulators have proposed a ban on swimming with the Aloha State's spinner dolphins in the wild.

Spinner dolphins are known for their high, spinning leaps and friendly demeanor, which makes them extremely popular with tourists and locals alike.

But they are nocturnal. And, according to the National Oceanic and Atmospheric Administration, constant contact with humans during the day is stressing them out.

"Over time, their health may be impacted. They may not nurture young as well. They may abandon their young or habitat, and they may suffer long-term population impacts," assistant regional administrator for protected resources with NOAA's National Marine Fisheries Service Ann Garrett told KGMB.

The proposed rule would ban swimmers and vessels from coming within 50 yards of a spinner dolphin in the ocean. And it would extend 2 nautical miles from shore.

Many animal rights activists are in favor of putting the ban into action.

But some local businesses that operate dolphin tours and excursions have mixed feelings about the idea.

"Our people stay in a neutral way. We don’t chase them or hoard them or corral them in any way. We allow the dolphins to come to us," Richard Holland, president of Ocean Journeys LLC, told KHON.

Officials say if the proposal becomes a rule, it will probably go into effect sometime next year.