Swedish Court To Julian Assange: No, You Still Can't Leave 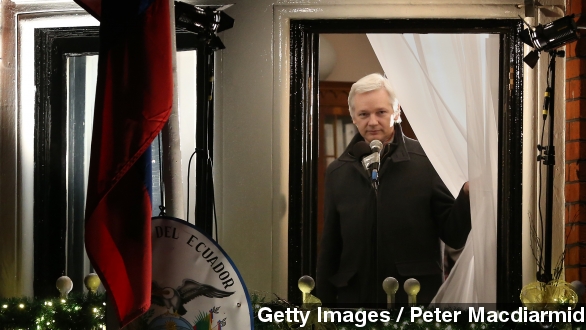 Sweden's judicial system has once again dashed the hopes of WikiLeaks founder Julian Assange, rejecting an appeal by his lawyers to drop his arrest warrant on Thursday.

That means Assange must continue residing in London's Ecuadorian embassy, which has served as his home since Ecuador granted him asylum in 2012. He's been under constant guard by British police ever since. (Video via ODN)

If Assange were to, say, walk out the door or revoke his asylum, he would face extradition to Sweden for allegations he committed sex crimes in 2010.

Assange has denied the allegations and fears his extradition to Sweden will be followed by an extradition to the U.S. for crimes related to his WikiLeaks site. (Video via YouTube / TheMediaCorruption)

So we have Assange holed up in a London embassy and Swedish prosecutors trying to question him about an alleged crime from four years ago. The two are pretty much deadlocked, and the Swedish appeals court has noticed.

The Guardian writes the court criticized Assange's prosecutors, saying their lack of progress in resolving the deadlock "is not in line with their obligation — in the interests of everyone concerned — to move the preliminary investigation forward."

Assange's lawyer told The Local's Swedish outlet that counts as a partial win.

All right, so what's next for Assange and Co. after this latest rejection?

According to The Local, Assange's lawyer will appeal to Sweden's Supreme Court to get the warrant dropped.

There's also the possibility that, with the recent pressure by the appeals court, Assange's prosecutors might travel to London to interview him about the charges. (Video via Vimeo / Jan Gottweiss)

Assange has suggested this in the past but was denied on grounds it wasn't normal legal practice to do so. (Video via Channel 4)

Earlier this year in August, Assange had claimed he'd be leaving the embassy "soon" citing health reasons — supposedly because being cooped up in a building without sunlight for two years isn't exactly healthy living.