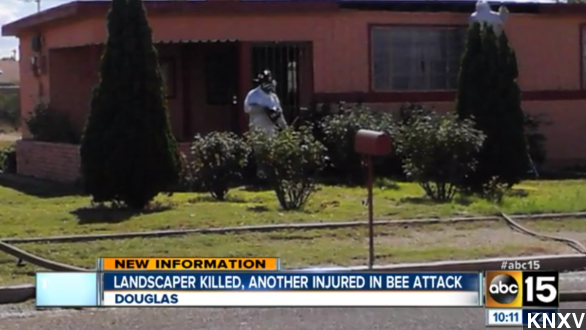 A massive swarm of Africanized bees killed a man doing landscaping work in southern Arizona Wednesday and sent others to the hospital.

The attack happened in Douglas, Arizona, when landscapers accidentally disturbed a colony in the attic of a home with noise from a lawnmower. The colony was home to an estimated 800,000 bees. (Video via KNXV)

Firefighters used foam and pesticides to fight the swarm before they were ultimately able to remove the hive — which an exterminator said could have been there for as many as 10 years. (Video via KOLD)

According to authorities, a 90-year-old man lived in the home and was possibly unaware of the hive, which was the size of a 55-gallon drum. The homeowner was not stung.

Africanized bees are particularly well-established in the Southwest, having been first detected on Texas' border with Mexico back in 1990.

So much so that the massive attack, which probably sounds almost unbelievable to many, didn't come as a total shock to the Douglas Fire Department. (Video via KPRC)

FIRE CHIEF MARIO NOVOA VIA KMSB: "We have one, two, three, four calls a week. We're used to the bee calls. Our crews actually have bee suits inside the trucks, so we're ready for these types of incidents. However, nothing of this magnitude."

Although the numbers on bee colonies are pretty varied, on average, a colony of Western honeybees will number around 50,000-60,000, so a colony of 800,000 is significant, to say the least. (Video via Peaceful Valley Farm Supply)

Still, Africanized bees, as the USDA notes, have been "melodramatically labeled 'killer bees' by Hollywood hype" because of their aggressive nature and previous attacks.

And headlines like this one from Gawker play right into that hype, saying that the bees were "hiding" in the man's attic, as if they were a horror movie villain.

Then again, the USDA itself helped stoke the fires of that fear with PSAs like this one from 1985.

USDA: "The newcomers are Africanized bees, sometimes called killer bees, and they have a nasty disposition."

Africanized bees are more prone to swarming and defending their colonies more aggressively than Western honeybees, which are more common in most of North America.

They're actually a crossbreed of that Western honeybee and its African counterpart, originally bred in Brazil in the 1950s by a scientist who was looking to create a hardier, more productive species of bee. (Video via National Geographic)

Some bees escaped the original apiary where they were being bred and have since established themselves across South and Central America before their arrival in the U.S. in the early 1990s. (Video via Fox News)

Another man who was taken to the hospital after the attack in Arizona was reportedly in critical condition Wednesday night.