Suspect No. 1: This Group Says It Downed The Plane In Egypt 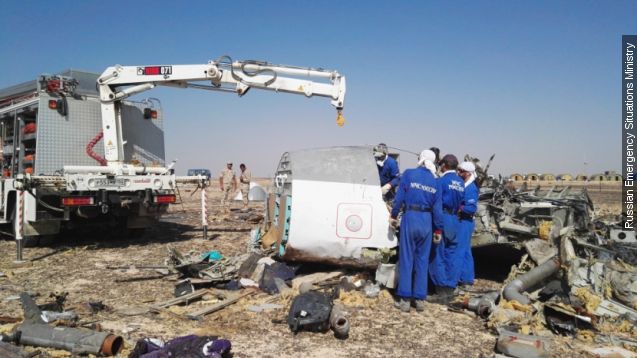 But what about Sinai Province? That's the ISIS affiliate taking credit for downing of the Russia-bound airliner that crashed with over 200 people on board.

Here's what you might not know about the group, also known as Al-Wilayat Sinai.

Egypt's vast Sinai desert, demilitarized as part of a peace deal between Israel and Egypt in 1979, has long been a haven for militant groups.

Including, Ansar Beit al-Maqdis, a group that emerged after the ousting of Egypt's then-President Hosni Mubarak and was later designated a terrorist organization by the U.S.

A year ago, the group pledged allegiance to ISIS leader Abu Bakr al-Baghdadi and renamed itself Sinai Province.

Unlike ISIS, Sinai Province's operations have been fairly limited in scope, focusing mainly on Egyptian security forces in the North Sinai.

Attacking a passenger jet with foreigners on board, if confirmed, would represent a major shift in tactics.

The Sinai Province, while insisting it was behind the crash, isn't saying how it carried it out. Investigators now say it's likely an explosion from a bomb brought down the plane.