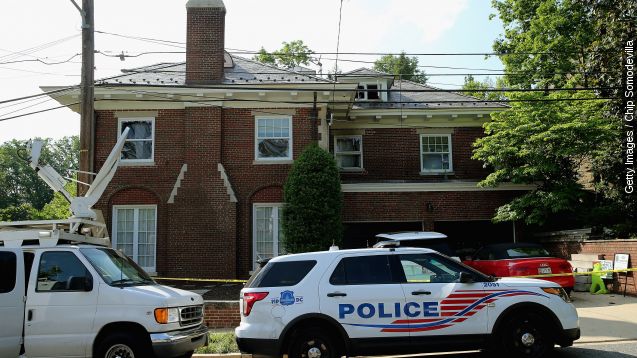 SMS
Suspect In DC Quadruple Homicide Arrested
By Jake Godin
By Jake Godin
May 22, 2015
The suspect in a quadruple homicide at a Washington, D.C. mansion was arrested after police reportedly identified him using DNA found on pizza crust.
SHOW TRANSCRIPT

The suspect in a quadruple homicide at an upscale Washington D.C. mansion last week was arrested Thursday evening after a multi-state manhunt took place.

Daron Dylon Wint, 34, was identified by police Wednesday and is suspected to have killed Savvas Savopoulos, his wife, 10-year old son and housekeeper on May 14 before attempting to burn down their mansion.

Although the search for Wint stretched up to New York City, he was arrested in northeast D.C. after being tailed by police. They ID'd him using pizza crust found at the mansion.

According to sources who spoke with ABC, Wint's DNA was found on the crust of a Domino's pizza from inside the house. The pizza was delivered to the home while Wint allegedly had the Savopoulos family and their housekeeper tied up.

The Washington Post reported Savopoulos made numerous phone calls shortly before the house caught fire, including a call to his assistant, a bank and an accountant. His assistant also dropped off $40,000 to the house.

D.C. mayor Muriel Bowser called the quadruple homicide an "act of evil" during a Thursday press conference once Wint had been identified.

So far there hasn't been a motive attached to the murders. According to law enforcement, Wint had worked for the company owned by Savopoulos in the past.

This video includes images from Getty Images and the DC Metropolitan Police Department.