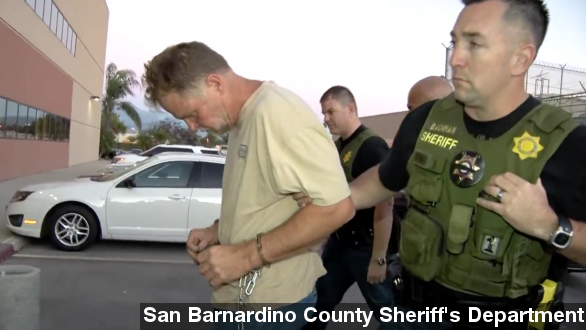 SMS
Suspect Arrested For Murder Of McStay Family
By Ben Lawson
By Ben Lawson
November 8, 2014
Authorities have arrested a business partner of Joseph McStay, who may have murdered McStay, his wife and two young children.
SHOW TRANSCRIPT

More than four years after a California family of four went missing, and one year after their remains were found in shallow graves in the Mojave Desert, an arrest has finally been made in the case.

The San Bernardino County Sheriff's Office now has Charles "Chase" Merritt in custody — he's the last man who saw the McStay family alive. Merritt is charged with four counts of murder for the alleged killing of Joseph and Summer McStay and their three and four-year-old sons.

The McStay family, who lived in Falbrook, California, disappeared without a trace in 2010. (Video via McStayFamily.org)

The Daily Beast writes the mysterious circumstances surrounding the case spurred all sorts of theories about their disappearance. Some had Joseph involved with Mexican drug cartels and authorities even released surveillance video of a family of four crossing the border into Mexico, suggesting they could be the McStays.

That theory was later disproven when an off-road motorcyclist discovered the family's remains in the Mojave desert. Investigators revealed the family had been killed by blunt force trauma and were likely murdered inside their home and brought out to the desert for burial.

Now, authorities have announced they believe it was Merritt, Joseph's friend and business partner, who committed the murders.

It's been publicly known for years that Merritt was a suspect in the case. He has even been interviewed by the media several times.

He gave an interview to the Daily Mail after the bodies were discovered in 2013, saying "All I want is for them to find the a******s who did this."

And he said this to CNN:

"There is nobody that I know of in his entire life, that I'm aware of, that would have any reason to hurt him."

A motive for the murders has not yet been released by police but Joseph's father, Patrick McStay, told KGTV he has a theory.

"Do you think it was about money?"

"Yeah, it was all about money."

"And what did Merritt stand to gain?"

"Joey had some big contracts he put together that were worth millions. You know, it's probably, not probably, most likely the money."

Merritt is currently being held without bail. It's still not clear if prosecutors will seek the death penalty.