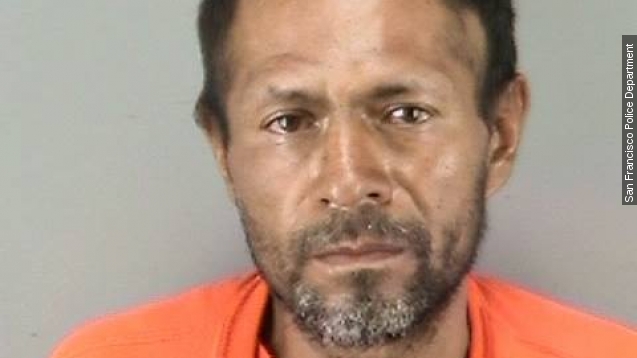 San Francisco police officers took Francisco Sanchez into custody Wednesday, less than an hour after they say he randomly shot a woman walking along a pier.

The victim, Kathryn Steinle, later died at a local hospital.

Steinle had been walking with her father Wednesday evening, when the shooting took place. He spoke with KNTV about what happened.

"So we were walking, three abreast, Kate and I and a friend of ours that's here visiting and there was a pop and Kate went down," Jim Steinle said.

People nearby were able to give a description of the shooter to San Francisco Police, and according to a statement on the department's Facebook page, Sanchez was taken into custody less than an hour after the shooting occurred.

"There does not appear to be any connection between the victim and the suspect. At this point, it appears to be a random shooting incident," Sgt. Mike Andraychak told KGO-TV.

Sanchez is a resident of Texas, and KGO-TV's Vic Lee reported on Twitter he is on probation there and "was deported to Mexico several times." Police officially announced the arrest Thursday.

Steinle's brother couldn't help but get choked up when he talked about his sister to KPIX.

"There's a million memories. ... And we loved Kate and I'll love her until the day I die," Brad Steinle said.