Robin Williams' Wife: He 'Was Losing His Mind, And He Was Aware Of It' 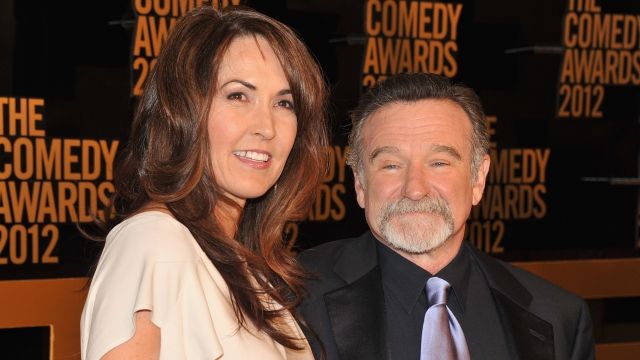 SMS
Robin Williams' Wife: He 'Was Losing His Mind, And He Was Aware Of It'
By Lindsey Pulse
By Lindsey Pulse
October 2, 2016
Susan Schneider Williams wrote a letter detailing the time leading up to Williams' death in 2014.
SHOW TRANSCRIPT

Susan Schneider Williams, widow of Robin Williams, is speaking out about her experience with Lewy body dementia — the disease that led to her husband's suicide.

"Looking back, I see that weekend, that time frame, as really the beginning of what became just a firestorm of symptoms that started raining down on Robin," Schneider Williams said during a podcast interview with Dr. Ted Burns.

In an open letter, Schneider Williams wrote of the years leading up to her husband's death and what she calls "the terrorist" inside his head.

Lewy body dementia is a degenerative disease that can cause hallucinations, memory loss and anxiety, among other symptoms. It's closely related to Parkinson's disease, which Williams was diagnosed with in May 2014.

Schneider Williams describes a complete personality change in Williams. She said her husband became more paranoid and anxious than he'd ever been in the years they'd known each other.

She wrote, "Robin was losing his mind, and he was aware of it."

But the letter isn't just the story of Williams' diagnosis; it also serves as an impassioned plea to those fighting LBD.

Schneider Williams wrote, "This is a personal story, sadly tragic and heartbreaking, but by sharing this information with you, I know that you can help make a difference in the lives of others."

Read the full letter in the American Academy of Neurology journal.