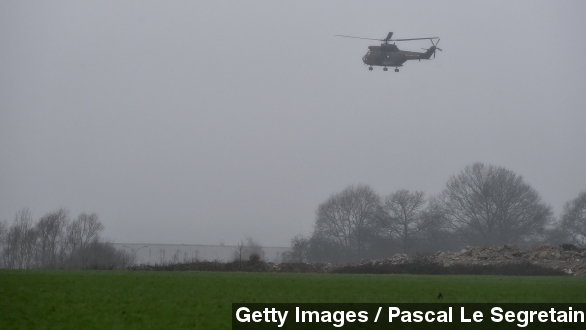 French police believe they have two men considered the main suspects in the Charlie Hebdo terror attack cornered, but it appeared as of Friday morning that Cherif and Said Kouachi don't plan on negotiating a surrender and may have taken a hostage.

Police now have a building widely reported as a printing company surrounded in Dammartin-en-Goele, a city about 20 miles outside Paris. Officials told reporters the suspects stole a car and exchanged gunfire with officers before holing up in the building. (Video via Sky News & BFMTV)

Investigators believe the Kouachi brothers opened fire inside the satirical magazine's offices on Wednesday killing 12 people before fleeing Paris. (Video via The Telegraph)

Police have said they believe another shooting that killed a police officer Thursday is connected to the brothers, though they didn't elaborate how. French president Francois Hollande has called the Charlie Hebdo shootings the worst terror attack in the country in 50 years.

Several helicopters could be seen hovering over the industrial area in Dammartin where the printing company is located. A BBC reporter said he counted at least five. While reporters on the ground have presumed police want the manhunt to end without further bloodshed, a member of the French parliament for the area told i>TELE in a phone interview the Kouachi brothers told police, "Vouloir mourir en martyrs." It means they want to be martyrs.

If the Kouachis were, in fact, the people who attacked Charlie Hebdo, it's believed they retaliated against the often irreverent ways the magazine portrays religious figures, especially showing illustrations of Muhammad.

France 24 reports 32-year-old Cherif Kouachi aspired to be a rapper as a young man before joining Islamic extremists.

The New York Times reported Wednesday a senior American official said older brother Said spent a few months training with Al-Qaeda in the Arabian Peninsula — or AQAP — in Yemen. The leader of AQAP at the time was an American-born extremist who "repeatedly called for the killing of cartoonists who insulted the Prophet Muhammad."

Police and French special forces in Dammartin ordered residents to stay in their home during Friday's standoff.