Surprise! This Baby Green Turtle Isn't Green At All 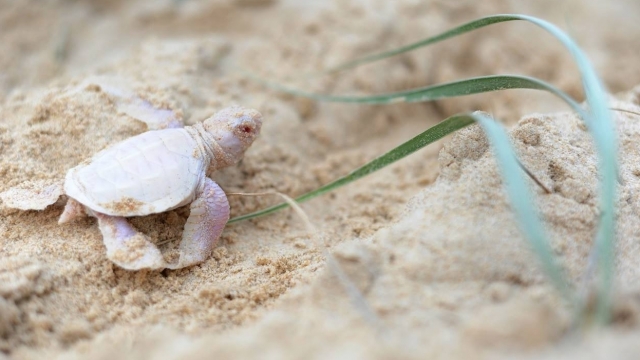 SMS
Surprise! This Baby Green Turtle Isn't Green At All
By Katie Link
By Katie Link
February 8, 2016
A volunteer group in Australia spotted a rare albino green turtle after it hatched from a nest on Castaways Beach.
SHOW TRANSCRIPT

If you’re seeing white and tan, your eyes aren’t failing you. Alby, the baby green turtle, really is white.

The rare albino sea turtle was spotted by volunteers at Castaways Beach in Queensland, Australia.

Government scientist Dr. Col Limpus told the Australian Broadcasting Corporation, "Albino hatchlings are extremely rare; it probably occurs at the rate of one in many hundreds of thousands of eggs that are laid."

Alby is the first albino green turtle volunteers with Coolum and North Shore Coast Care have ever seen.

According to the group’s Facebook page, Alby was one of 122 hatchlings in this particular nest. And though Alby may already be beating the odds, the hatchling has a tough road ahead.

Dr. Limpus said, "Normally, they don’t survive coming out of the nest and when they do they’re abnormal and not well suited to the environment, which means the chance of survival is very slim."

But Alby’s green brothers and sisters will also struggle to survive. According to the president of the Coolum and North Shore Coast Care Group, only 1 in 1,000 green sea turtles reaches adulthood.

We won’t know what happens next for the little reptile, but as the volunteer group wrote on Facebook, "May the oceans be kind to this unique little green turtle!"