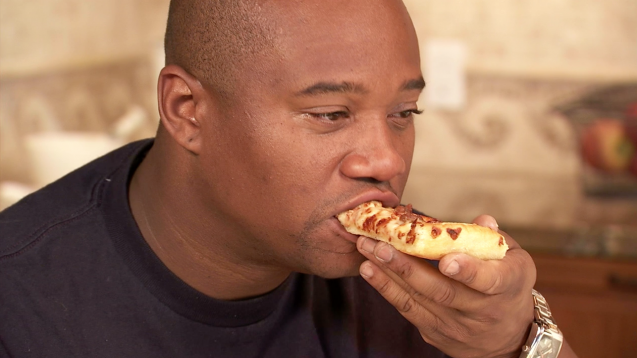 By Eugene Daniels
November 21, 2015
We now know men eat more food in front of women to get their attention. Because, science.
SHOW TRANSCRIPT

Men do a lot of things to impress the opposite sex.

"The only way to bag a classy lady, is to give her two tickets to the gun show," Will Ferrell says in Anchorman: The Legend of Ron Burgundy.

And now, you can include overeating as part of that list. A recently released study by Cornell University found men eat more food when they are around women.

The research took place at an Italian restaurant during a two-week period. According to the findings, when men were eating with a woman, they ate 93% more pizza. And the overeating isn't limited to just cheesy, saucy goodness: men also scarfed down 86% more salad when hanging out with a lady-friend.

The theory is, this overeating is all about competition; by eating more, men prove "they possess extraordinary skills" when compared to other men. So it's basically like saying "I am man. Watch me eat all the pizza in sight. Now pick me."

It may seem like a lighthearted study, but eating to impress actually may just be coded into that pesky Y chromosome. Through "evolutionary analyses," other research has found men take more hazardous risks than women. And the authors of the Cornell study say this is just further proof of that.

Researchers said, "conspicuous consumption of food is a much less dramatic 'risk' than, say, going off to the frontlines of war, but research on the effects of obesity nonetheless show overeating to constitute risky behavior."

And at a time when more than a quarter of Americans are obese, the behavior could lead to serious consequences if it's not nipped in the bud.

Women, on the other hand, ate the same whether they were with a man or a woman. However, they did say they felt like they overate after dining with a man, even though researchers found no actual evidence they did.