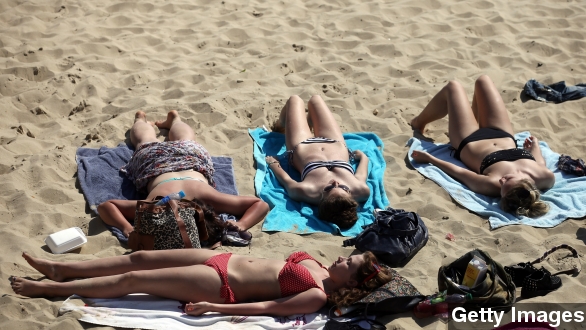 The nation's top medical official says a generation of bad tanning habits has led to a surge in the deadliest form of skin cancer. (Via Getty Images)

The report said overexposure to ultraviolet rays — whether outdoors or in a tanning salon — has lead to a 200 percent spike in melanoma-related deaths since 1973. (Via KNBC)

The report also points out that every year in the U.S. nearly 5 million people are treated for some form of skin cancer — at a cost of around $8.1 billion — and of those cancers, melanoma causes the most deaths at 9,000 per year. (Via Getty Images)

Now, Lushniak isn't suggesting people stop tanning altogether, but he did say "the facts speak for themselves." And, along with reminders on how to protect skin, he urged state and local officials to get moving on legislation that would regulate indoor tanning — especially for young people.

In fact, of those 9,000 melanoma-related deaths we mentioned, two-thirds came from indoor tanning. (Via Getty Images)

And according to the Melanoma Research Foundation, "Exposure to tanning beds before age 30 increases a person’s risk of developing melanoma by 75 percent, and younger people who regularly use tanning beds are eight times more likely to develop melanoma than people who have never used them."

Currently, 11 U.S. states have rules in place barring people under the age of 18 from using tanning salons. Just less than half of U.S. states have bans for younger minors. (Via National Conference of State Legislatures)

In an interview with The Washington Post, Lushniak equates the problems of youth tanning to smoking.

And President Obama is on board too, including a 10 percent tanning tax provision in the Affordable Care Act to deter people from using tanning services.

USA Today says, predictably, the Indoor Tanning Association is not pleased. It accused Lushniak of playing up the the risks of tanning for press attention.

"[Tanning critics] always exaggerate the risks of exposure to ultraviolet light in order to get the attention of the public, the media and the government."

The organization claimed UV rays aren't any more harmful coming from a tanning bed than from the sun as long as it's done in moderation. (Via KYW-TV)

Some well-known tips for decreasing chances of getting melanoma include frequently applying sunscreen and getting plenty of time in the shade while outdoors.