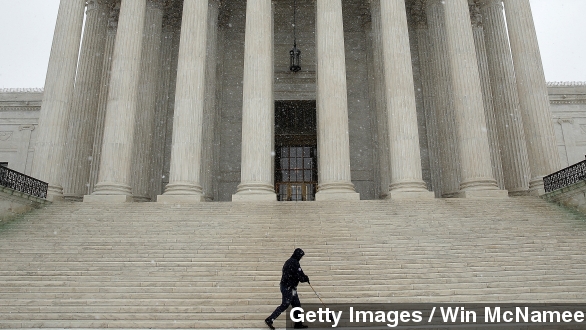 The Supreme Court announced Monday it will not hear Wisconsin's voter ID law.

It's been a bumpy ride for the law in the Badger State. It requires voters to show a state-issued photo ID in order to vote. Less than a year ago:

"A federal judge calling the state's voter ID law a burden on the poor and minorities," WLUK reported.

And then, a couple months later:

USA Today describes the Supreme Court's rejection of a challenge to the law as a victory for Republicans and a loss for civil rights groups.

Critics have long argued voter ID laws disproportionately affect minorities, the poor and seniors who are less likely to have the proper identification. (Video via WTMJ-TV)

But supporters like Wisconsin's Attorney General Brad Schimel say it's not an undue burden. Schimel argued in February, "For those who lack ID, obtaining one and bringing it to the polling place is generally no more of a burden than the process of voting itself."

With the Supreme Court’s refusal to take up Wisconsin’s law, the state is free to start putting it in place. Three other states — North Carolina, Ohio and Texas — had their voter ID laws challenged at the Supreme Court. None were blocked.