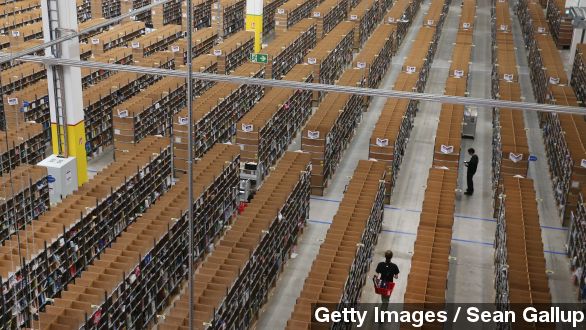 SMS
Supreme Court Says No Compensation For Security Screening
By Erik Shute
By Erik Shute
December 10, 2014
The Supreme Court has decided a temp agency that employs Amazon warehouse workers shouldn't have to pay them for time spent in security screenings.
SHOW TRANSCRIPT

The Supreme Court made a decision in the case that pitted Amazon warehouse workers against a temp agency that employed them. It ruled that company, Integrity Staffing Solutions, shouldn't have to pay employees to wait for a security screening after their workday ends.

The case originates from a lawsuit by former warehouse worker Jesse Busk. In it, the agency's end-of-day security policy is described as a lengthy process in which employees wait to pass through metal detectors. (Video via KOLO)

"It was not unusual to last 25 minutes every day," Busk told Bloomberg.

Integrity Staffing Solutions says the security line is used to deter theft from its 40 or so U.S. fulfillment centers. Even though the system is necessary to operations, Justice Clarence Thomas, who wrote the opinion, says the line was not "integral and indispensable" to the employee's job. (Video via KMPH)

In other words, that "job" involves retrieving and packaging Amazon's items and doesn't involve waiting in line. Thomas explained if the screenings were removed, it would not inhibit "the employees' ability to complete their work." Therefore they don't need to be paid for it.

However, the key element to remember about the screenings is that they take place after an employee's paid shift is over. This is what ultimately allowed the court to say the screening was not part of the job description. (Video via Al Jazeera)

The decision could affect some 13 class-action lawsuits against Amazon, CVS, Ross and TJ Maxx, among others, and their 400,000 employees named in the suits.

If compensation isn't an option, a compromise could be next. In the original case, employees said more security screeners or staggered work shifts could have sped up the process. Amazon has not commented on this case or if it plans to change its current method.