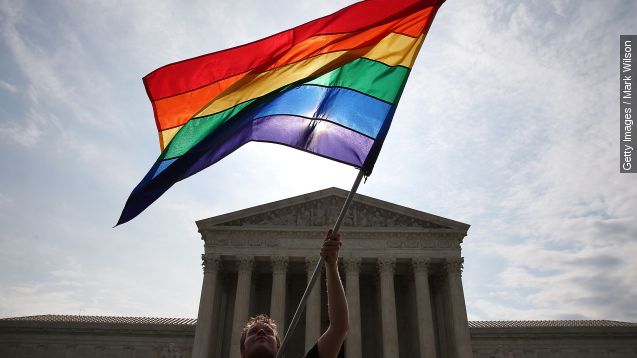 "In my second inaugural address, I said that if we are truly created equal, then surely the love we commit to one another must be equal, as well," President Obama said Friday. "It is gratifying to see that principle enshrined into law by this decision."

In one of the most anticipated decisions of the year, the U.S. Supreme Court ruled in favor of same-sex marriage.

The justices heard arguments on two issues: whether same-sex marriage is a constitutional right and, if not, do states have to recognize same-sex marriages performed in other states. Those questions come from challenges to gay marriage bans in Kentucky, Michigan, Ohio and Tennessee.

This means same-sex marriage is legal across the country and the states with bans in place have to reverse course.

"This ruling will strengthen all of our communities by offering to all loving same-sex couples the dignity of marriage across this great land," Obama said. "When all Americans are treated as equal, we are all more free."

The decision is a big win for same-sex marriage advocates, and it comes two years after the Supreme Court struck down a significant part of the Defense of Marriage Act, or DOMA.

There are currently 36 states and the District of Columbia that allow same-sex marriages, whether they enacted those policies on their own or were forced to by federal court rulings. Fourteen states still have bans.